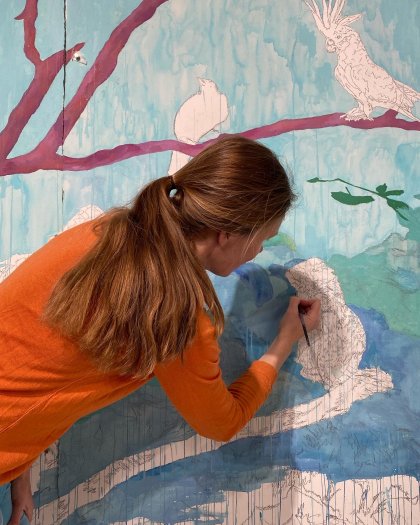 I come from a family where art and communication with artists have been emphasized through generations. My great grandfather, Lucien Claudius Dedichen, was Edvard Munch's doctor and friend, and my other great grandfather, Hans Blehr, was married to Tulla Larsen, who previously had been engaged to Edvard Munch. My first job in the art world after graduating from the university was at the Munch Museum.

Munch at the Munch Museum

At the Munch Museum in Oslo, my job was to assist the chief conservator in examining the museum's collection of 17,300 prints in preparation for the catalog raisonne.

I always try to learn about, but also how to perform the different techniques used by master printers. Visiting Gemini in LA and Atelier Clot in Paris has given me a lot of insight into the process of making prints. In New York, I learned various printing techniques at Pace Editions .

As research associate at Harvard University (1999-2000) I met dedicated art collectors who marked me forever. Phil and Lynn Straus had at that time the most impressive collection of works by Edvard Munch in the world. They welcomed me with open arms to their houses, and I learned about their collection as well as the passion of collecting, and what to look for when buying works on paper. This knowledge has been very valuable in my subsequent works, as I have been engaged by many collectors around the world to build their art collections.

Warhol and Tim Hunt at the Warhol Foundation

In New York I met Tim Hunt who was exclusive agent for prints and photographs at the Andy Warhol Foundation for the Visual Arts Inc. We became friends, he introduced me to Warhol's After Munch silkscreens, and he showed me around at the Foundation.

Munch and Warhol after Munch on the residential ship, The World

In 2002, aboard The World, I organized and curated the inaugural exhibition titled Munch and Warhol after Munch, with opening of the exhibition and departure from London, sailing around the world.

Warhol After Munch at the Louisiana

Another journey took place in 2010 in Copenhagen at the Louisana Museum of Modern Art, where I provided all the Warhol works and most of the Munch works for the exhibition Warhol after Munch. It was with great pride and pleasure to see them all on the Louisiana wall, in the spirit of Warhol - quantity and repetition.

In 2010 I edited and also wrote four of the texts in Warhol Munch published by Louisiana Museum of Modern Art Publications. Three of the texts are interviews with people who worked with Warhol and with people who works with Warhol's estate. My aim in my texts was to explain the making of the Warhol After Munch series in dazzling new color tones including silver and gold based on four of Munch's major subjects, the iconic “The Scream,” “Madonna,” “Self-Portrait” and “The Brooch”.

In "On distinctiveness in Andy Warhol's after Munch series" I interviewed Tim Hunt, who at the time was the exclusive agent for print and photography at the Andy Warhol Foundation in NY. Hunt's vast experience from working with Warhol's prints and photographs provides a valuable insight that is worth reading.

In "On the making of Andy Warhol's after Munch series", I interviewed Donald Sheridan, who had been a former assistant to Rupert Jason Smith, the master printer of Andy Warhol. Sheridan's knowledge of the making silkscreen prints provides in this interview detailed information about the process from photography and images found to Warhol's works of art.

In "Andy Warhol's Munch Source Material", I'm in dialogue with Matt Wrbican, who was the archivist at the Andy Warhol Museum in Pittsburgh. Wrbican refers to a file containing information about the ordered After Munch series, stored in the Pittsburgh archives. The Warhol After Munch series was a planned series, but never realized, therefore all Warhol After Munch works are unique proofs. In this dialog, the information in the file shows the planned number of editions as well as the planned number of colors.

According to volume V of the catalogue for Warhol's Estate auction at Sotheby's NY, held over 10 days in April 1988, Warhol owned several Munch prints

In 2012 I wrote the text "Warhol's Polaroids of H.M.Queen Sonja - Impulse and Intensity" for the publication following the exhibition of H.M.Queen Sonja´s Art Collection at the Henie Onstad Art Center in Norway. The text gives an in-depth description of the visit H.M.Queen Sonja of Norway made to Andy Warhol's renowned studio The Factory in New York in 1982 where after a make-up session with Warhol's creative team, a series of 29 polaroid shots were taken which served as the basis for his silkscreen prints. Warhol's use of his Big Shot camera, the atmosphere between Warhol and his model during the photo session, the lightning in the studio and finally Warhol's selection of the one polaroid to be used for the silkscreens resulted in a series of 6 silkscreens of Crown Princess Sonja which formed part of Warhol's famous series Celebrities.

In 2013 I edited and also wrote part of Warhol's Queens which was publised by Hatje Cantz. With this book, my aim was to offer a surprising mosaic consisting of Andy Warhol’s portraits of royal queens and images of drag queens. I found it astonishing that noone had made this focus earlier, and I contacted writers that I knew would contribute on a high and interesting level with texts from different angels about Royal queens and drag queens. Warhol's Queens goes in depth on how for Warhol, both genuine as well as fake queens slipped into the role of idealized movie-star femininity and how he characterized the drag queens as “living testimony to the way women used to want to be, the way some people still want them to be, and the way some women still actually want to be.”Warhol's Queens presents intense faces with exceptionally colored lips, eyes, and hair that serve as sexual fetishes and are too tempting to resist.